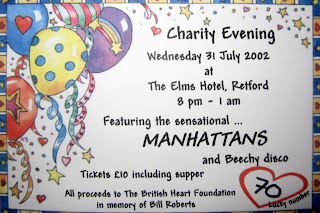 In aid of The British Heart Foundation

This was our first event which we had decided to organise as an evening in memory of our dad who had died suddenly from heart related disease in December of the previous year. 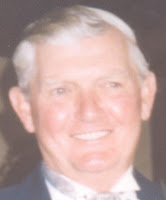 In fact this was intended to be our only event as we had not planned to do anything more than raise some funds for the British Heart Foundation whilst celebrating our dad's life and remembering him.

We were also remembering Ian's boss Stuart Watson who had also died from heart disease a couple of months after dad in February 2002. 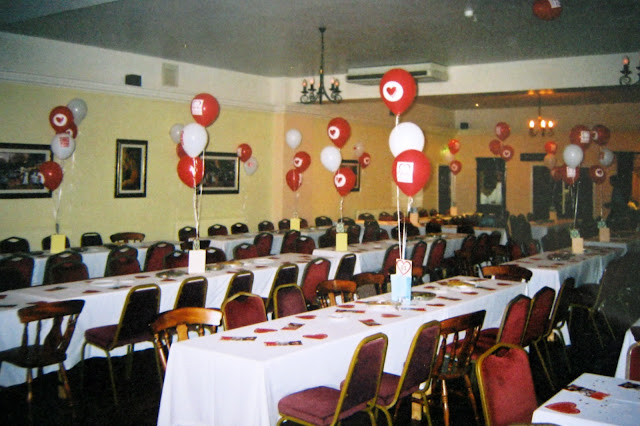 The tables looked great with colourful BHF balloons and lots of leaflets and information about the work done by the British Heart Foundation.  The room was really full and we had so many people at this event that we had to arrange the tables in rows to fit them all in 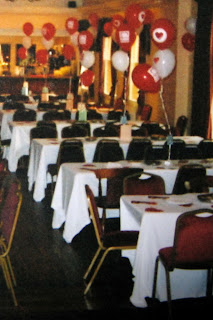 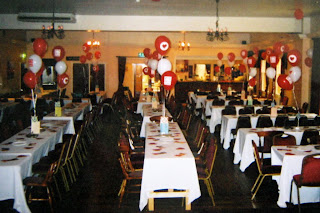 But of course this was not destined to be the one-off event  that was planned as everyone had enjoyed it so much that they were soon asking Beechy when he was doing the next one!  So the rest, as they say, is history...

We were really pleased with the total we had raised for the British Heart Foundation - and with the positive and enthusiastic response we had received from everyone who had attended. 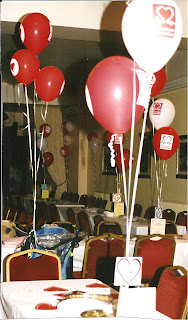 Even though the BHF is a national charity we decided that we would prefer the monies that we raised to support people in the local area as this would make it more personal and relevant to those who were attending our event and being so generous with their donations - and we could see exactly where our raised funds were going.

So this cash was put towards the Bassetlaw Hospital Appeal which was being run by the local regional area for the BHF in order to buy life saving equipment to be used at Bassetlaw hospital.

We had received some lovely raffle prizes for our draw and we had our raffle tickets printed so that we could sell them before the event. 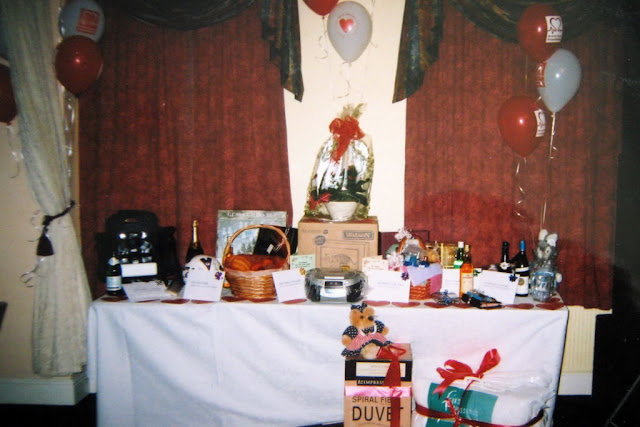 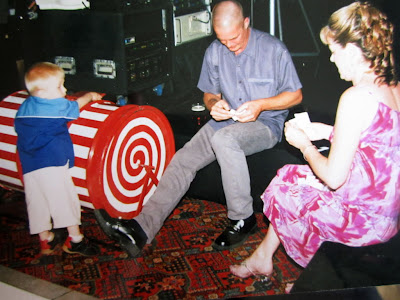 We even borrowed a proper tombola drum to put the tickets in so that they would have a really good mix up before they were drawn - and of course we had our little helper (Callum not Robin)! 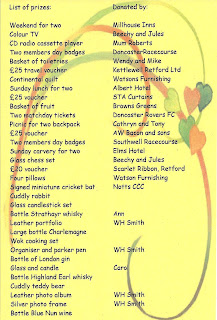 These generous prize donations from local and national companies and also from individuals set the very high standard for the great raffle which we still have at our main event each year.

Mike and I ended up squeezing a huge box containing the second prize of a portable colour telly into our car to bring back over the Pennines to Manchester as it had been won by a teacher in the school I was working in at the time - something smaller like a teddy or a bottle of wine would have been much easier to transport!... 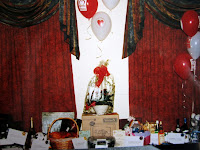 Music for the evening was provided by the magnificent Manhattans who serenaded us with their soul and motown classics... 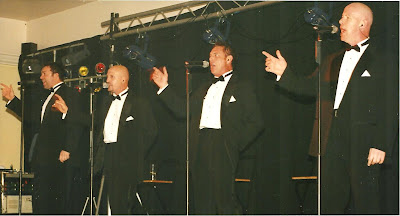 ... and the in-between dancing music bit was provided by the equally magnificent Beechy's disco! 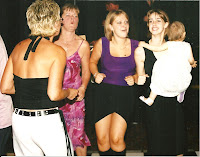 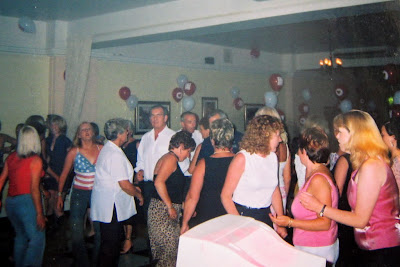 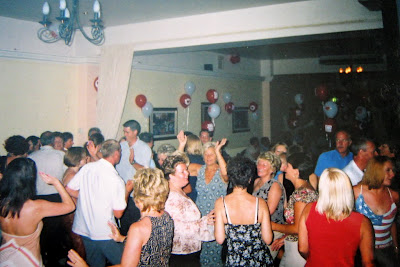 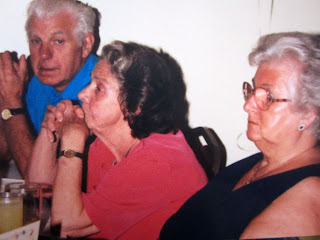 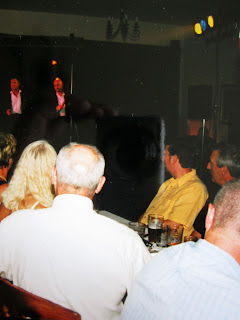 Everyone seemed to enjoy the evening though it was obviously quite bittersweet for the family, mum especially.  But she was pleased with the amount of money raised for the British Heart Foundation on the evening.

Contrary to how it looks here Julie and Robin did not just hang around all evening drinking... 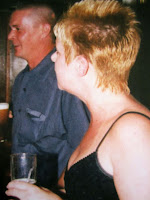 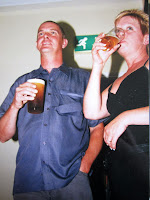 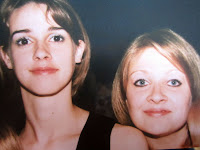 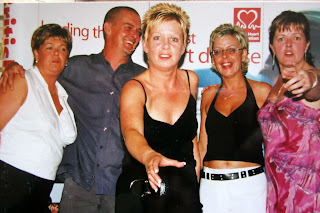 I've no idea what we were doing here - Julie is probably trying to sabotage the photo and I'm trying to stop her... 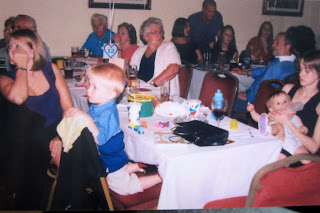 Dad's two great grandchildren (Luisa's son Callum and Ema's daughter Molly) also attended the event - and managed to stay up for the whole evening with just a short forty winks in the buggy! 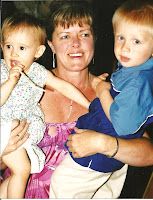 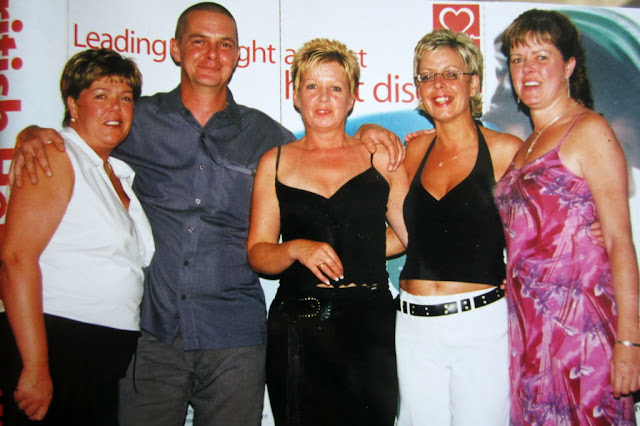 The five of us had our photo taken - in age order as always - left to right Cathryn, Robin, Julie, Carol and Wendy. 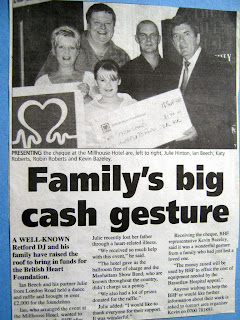 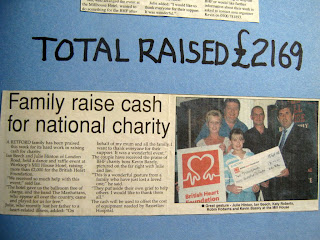 The money was presented to the BHF and several articles appeared in the local papers - with most of the details right! 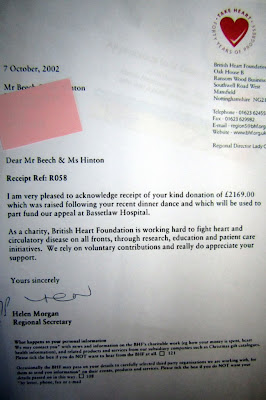 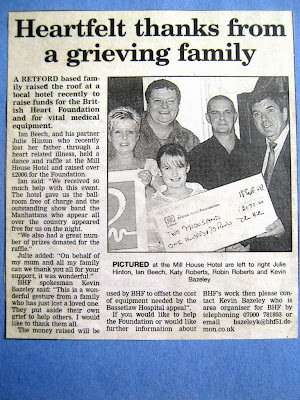 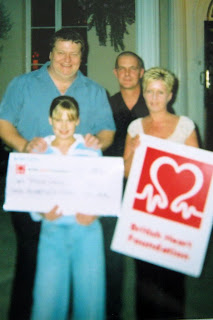 We would love to see any photos that you have from this event - and we would be happy to put them on the blog so that everyone else can see how much we have all aged matured over the years!

It was a wonderful evening with all our family and friends around us and I'm sure that dad would have thoroughly approved of everything and been very proud of us all.

Thank you everyone for your support!